Follow Billy as he tries to find redemption from his uncertain past. Chase your destiny on the high seas and embark on a heroic quest for glory and gills.

* Hours of gameplay across the continents including a never-ending Infinite arcade world.
* Dozens of unlockables, weapons and items including popular fishing gear like the Most Expensive Hairdryer In The World and A Bowling Ball.
* Fish that become hats.
* No IAP - buy the game, play the game. No additional costs, no hidden fees. Even the hats are IAP-free.
* Fish that become hats.

Winner of a mobile Design Award in 2013; Nominated for the 2011 Independent Games Festival Awards; Declared Most Important News Story 2011 by industry magazine Control International; Featured in The New York Times.

"Ridiculous Fishing is such a complete package that it's an effortless recommendation." ~ Eli Hodapp (TouchArcade) - (5 / 5)

"Every aspect of the game, from the rewarding upgrade system to the unique graphics, displays an intricate craftsmanship we rarely see on [mobile]." ~ Chris Reed (Slide2Play) - (4 / 4)

"One of the most mechanically satisfying experiences you'll ever find, and wrapped in a dazzlingly cool aesthetic." ~ Eli Cymet (Gamezebo) - (5 / 5)

"Ridiculous Fishing is from an alternate [mobile] gaming universe where Nintendo is the production quality standard and action is everything." ~ Robert Ashley (A Life Well Wasted)

"I'm hooked up to an IV and playing Ridiculous Fishing. One is medicine, the other is a painkiller." ~ Ben Kuchera (PA Report)

***IMPORTANT NOTE*** - If you are only seeing a black screen when running the game, please enable Developer Options under Settings and then make sure the "Disable HW overlays" option is selected (i.e. there's a checkmark in the box).Then try running the game again.If that doesn't help, please email us!

Also, Android tablets with a width of <640 pixels are not supported, including the Galaxy Tab 3 7.0.

To add a Qi badge for Ridiculous Fishing to your site: 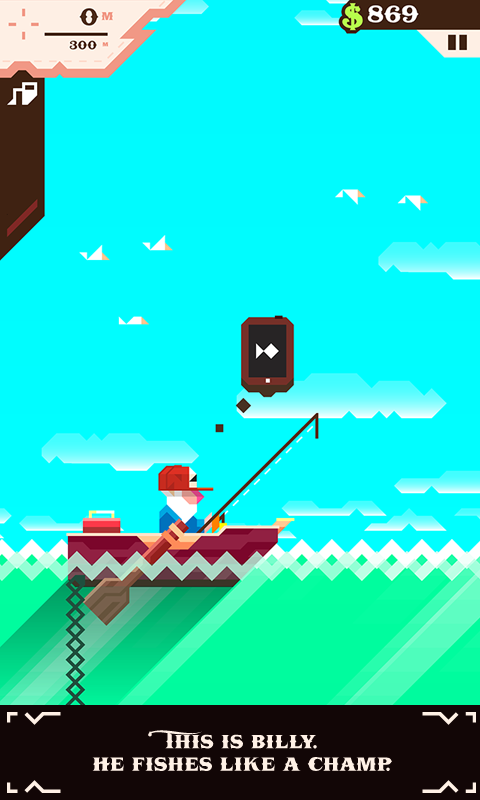