Caverns of the Snow Witch

Deep within the Crystal Caves of Icefinger Mountains, the dreaded Snow Witch is plotting to bring on a new ice age. A brave trapper dies in your arms and lays the burden of his mission on your shoulders. But time is running out – will YOU take up the challenge?

"Caverns of the Snow Witch is a classic gamebook, and this digital version reinvigorates it for a digital generation. It's fast, it's fun, and its story of icy tundra and giant dragons is worth sticking with until the end." - Pocket Gamer - 8 out 10 - Silver Award

"...it's a very solid gamebook, and if you've enjoyed any of Tin Man's other conversions of Livingstone's work, it's a journey worth embarking on." - Touch Arcade - 4 out of 5

"Fans of the original will also appreciate that they can switch the visuals to a 1980s style gamebook appearance, away from the more stylish modern looks that Tin Man Games offers. It ensures that Fighting Fantasy: Caverns of the Snow Witch really is the best of both worlds. It’s nostalgic yet offers features that we all wished we had back in the day, like fast dice. That’s a great combination that easily continues Tin Man Games’s reign as a fine purveyor of classic adventure game books." - 148Apps - 4 out of 5

"Caverns of the Snow Witch is a great blast from the past, perfect for the winter months." - Starburst Magazine - 8 out of 10

** FEATURES **
• Make the gamebook as easy or hard as you like and even turn on a special cheat mode to read it old-school!
• Atmospheric new visuals which can be turned off to make the gamebook look like it came off the printing press in the 80s!
• Les Edwards’ famous cover brought to life.
• Gary Ward and Edward Crosby’s classic illustrations included along with new, full color illustrations specifically for this edition!
• Achievements to find throughout the gamebook.

• Read the book horizontally or vertically on your tablet.
• An automated Adventure Sheet to keep track of stats and inventory.
• Realistic physics based dice rolling. Shake your device!
• Artwork gallery. Find an illustration in the gamebook and be able to access it full-screen forever.
• Bookmarking system which saves your position in the gamebook, much like putting your fingers between the pages to remember your previous page when reading the paperback!
• Specially composed soundtrack and sound effects.

Writer, Ian Livingstone, was one of the co-founders of Games Workshop and has continued to have a distinguished career in both tabletop gaming and video games.

Tin Man Games have signed a licensing deal to release the Fighting Fantasy series on Android, so expect to see more of your favourite adventure gamebooks appearing soon!

To add a Qi badge for Caverns of the Snow Witch to your site:

OTHER GAMES & APPS FROM TIN MAN GAMES
Appointment with FEAR
Blood of the Zombies
FFC: Bloodbones
GA 1: An Assassin in Orlandes
GA2: Siege of the Necromancer
GA3: Slaves of Rema
GA4: Revenant Rising
GA5:Catacombs of the Undercity
GA7: Temple of the Spider God
GA8: Curse of the Assassin
GA9: Sultans of Rema
Gary Chalk's Gun Dogs
Herald of Oblivion
House Of Hell
Island of the Lizard King
Sons of Uruzime
Starship Traveller
The Forgotten Spell
The Sagas of Fire*Wolf
To Be Or Not To Be
Trial of the Clone
Vampire Boyfriends
889990
3da448501c2108b2a7f448dfa2e44689 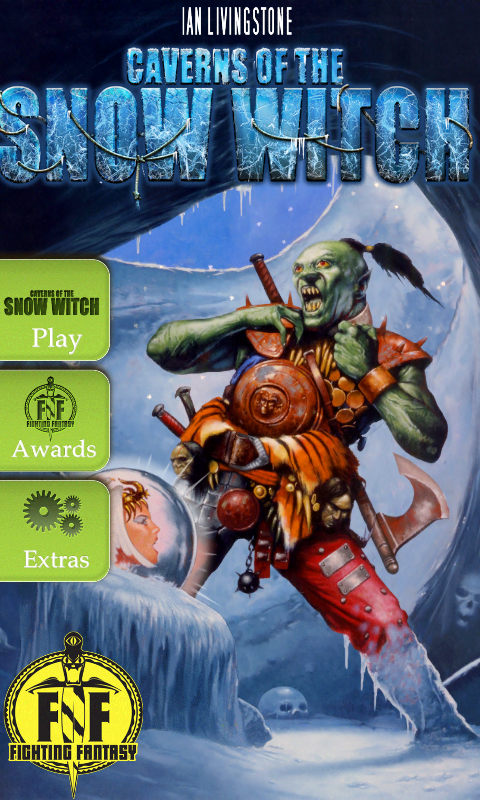